My new paranormal historical novel is out!

Yes, I know that I seem to have disappeared from the face of this earth...and I apologize for that. In a sense, I have transcended life as we know it...

You see, I've been buried writing my latest novel, AMELIA 1868. In the process, I've expanded my horizons into the paranormal world. I invite you to share this suspense-filled journey with me through the pages of this novel. Read on for more information:

Rose, a free-spirited young woman, leaves her fiancee at the altar of their country church in Walnut, Iowa. Driven by forces beyond her control, she flees to the old western ghost town of Virginia City, Montana, where she feels oddly at home...

Drawn to an old cemetery in the mountains, she discovers a crumbling weathered tombstone and begins to sob uncontrollably. Only two words are etched upon the stone - AMELIA 1868. Obsessed with uncovering the identity of this long-forgotten woman, Rose finds herself transported back and forth in time between the life of a hurdy-gurdy dance hall girl struggling to survive in the 1860s and her own sheltered life in 2011.

Her strange and intriguing journey becomes more complicated when a love interest materializes and throws her off balance. Her life becomes a bizarre dance twisting and turning between the past and the present. Can she find a way to move into the future?

Excellent reviews of this novel are already coming in!

Please check out my new website, http://www.novelsbyjanetkay.com for more information, a photo gallery, and a new contest that you may want to enter soon.

Posted by Janet Kay's Journey at 2:42 PM No comments: 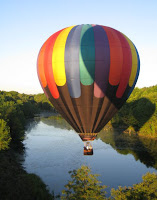 Are you living the dream, your own personal dream? Or has life gotten so busy that you've forgotten how to dream? Do you even remember those special dreams you once had for your life?

I recently read an article in the Galveston, Texas daily newspaper by Dr. Victor S. Sierpina, Professor of Integrative Medicine at the University of Texas Medical Branch. The title - "Living the dream - the secret to true health, vitality."

According to Dr. Sierpina, "Finding and living our unique dream is what brings true health, energy, vitality and creativity to our lives no matter our age." He goes on to note that he is astounded by the many creative artists he's met over the years who live to ripe old ages. They are productive, creative, expressing their soul nature.

"To thrive, not just survive," Sierpina writes, "requires having purpose and meaning in life as Viktor Frankl taught in his classic book, Man's Search for Meaning."

His words were both a wake-up call and confirmation that perhaps I was finally doing something right! I was following my lifelong dream, one that I'd put on hold for far too long. My dream is and always has been, to become an author. Now I am one! My debut novel, "Waters of the Dancing Sky," is doing well, and I'm hard at work on "Amelia 1868" with several other novels coming to life in the recesses of my creative mind.

We don't live forever. Maybe it's time for us all to rediscover or create new dreams. Dreams allow us to express our creativity in unique ways. And creativity, I think, seems to hold the key to happiness and perhaps - longevity.

With your dreams firmly implanted in your mind, it's time to start living those dreams. You may need to take one baby step at a time, due to other commitments. But you can do it! And your life will be richer in many ways.

As for me, I'm "living the dream" and plan to do so for many years to come!

"Beauty Lies in the Eye of the Beholder" 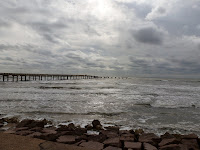 Was it Plato or Shakespeare who left us these words of wisdom? Some even say this quote is a variation of a Proverb. Regardless, it's one of my favorite quotes, and I think it applies to many situations in life.

In my case, I got up this morning on beautiful Galveston Island hoping for a sunny day on the beach. Instead the wind howled, the sun refused to appear, and the radio informed me that the current temperature was 36 degrees! So much for my beautiful day, I thought. Maybe I'd just bury myself under the covers and catch up on my sleep.

After a few minutes I quit feeling sorry for myself. After all, folks at home in Wisconsin were shoveling snow. Other parts of the country and the world were struggling with extreme weather. Who was I to complain?

So I decided to quit being a wimp and head out on my daily 3.5 mile hike along the beach. It was difficult at first to head into the wind. Head down, I forced myself to move along. It would be easier heading back home.

As I hiked along, something strange happened. The ugliness of the day began to slip away. The pounding surf thundered and splashed, white froth dancing on the crest of the waves. Dark cloud formations interacted with soft billowy clouds, creating an assortment of animals and objects in the sky. The sun even tried to peak out now and then, casting striking reflections on the world below. Crazy pelicans plopped into the surf as seagulls clustered on the shore. Great photo opportunities!

More importantly, there seems to be something about days like this that bring out one's creativity. You draw inward as you tense up against the wind and cold, going deeper inside to places you've perhaps never been. In my case, I found myself thinking about the novel I'm currently writing - Amelia 1868. Some of the parts I'd been struggling with started to come together.

I began to see the beauty in the ugly parts of life, in the trials and tribulations that we all experience at times.

I'd like to share another example of beauty lying in the eye of the beholder. With Valentine's Day coming up, I'm thinking of a couple I recently saw walking along the seawall. They had to be well into their 70's, perhaps 80. He used a cane. They were wrinkled and gray-haired as older people tend to be and somewhat overweight. Not exactly "beautiful" in the sense that the world unfortunately defines beauty.

But they held hands as they gazed lovingly into each other's eyes. So much in love after all these years. Yes, they'd been married 50 years. He obviously found his wife to be the most beautiful woman in the world. To me, this is true beauty. And I do plan to use this couple in a future novel!

Labels: beauty in the eye of the beholder, creativity, Galveston, Janet Kay, Waters of the Dancing Sky 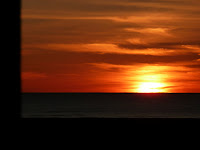 This morning I captured this photo of a breath-taking sunrise over the Gulf of Mexico here in Galveston, Texas. It made my day! And it made me think about the infinite possibilities ahead for us all. Emily Dickinson once wrote, "I dwell in possibility..." So do I!

A new year. A new day. A new beginning.

I don't know about you, but speaking for myself, I made my usual New Year's Resolutions recently. I've already broken some of them! But, gazing out at the sunrise from my balcony, I'm inspired to begin again. Maybe resolutions are meant to change, to evolve as the year progresses. What counts is that we have goals in life and that we try to make our dreams come true.

Never forget to dream and to believe in your dreams! One of my greatest dreams is to write novels that will have value and help other people in some small way. To inspire hope. To share the beauty of a sunrise and never forget that a new day is dawning - every day...

What are YOUR dreams? And what will you do with this day that God has created?

Happy New Day to you all!