SHE WHO LAUGHS LASTS... 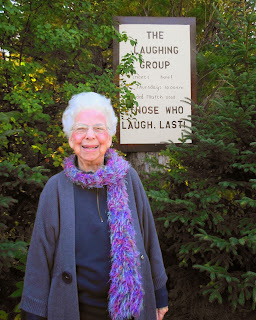 Life has been difficult, to say the least, during the past year of my life. This has been my time to face love and loss - to cherish the tender and unforgettable moments while struggling with the fact that my dearest friend on this earth may not be here with me much longer. Cancer has a way of destroying dreams and crippling the creative process.

I've managed to occasionally visit my St. Croix Writers Group in Solon Springs, Wisconsin. Here I find inspiration and support that helps to keep me going.

Let me tell you about our group's leader, a character whom you writers out there may very well want to write into your next novel!

Jo Stewart is 85 years young, a talented writer with a heart of gold, and...a crazy sense of humor!In 2006, she decided to start a "laughing group" on the Main Street of the little village of Solon Springs, Wisconsin.

She had been inspired by visitors who told her of laughing groups sprouting up across the world, dedicated to enhancing wellness through laughing.

Actually, it all began in Mumbia, India in the early 1990s when Dr. Madan Kataria became interested in the growing body of scientific evidence showing that laughter is beneficial for physical and mental health. He soon began prescribing "laughter" to his patients. In March of 1995, he launched his first Laughter Club in a public park in his neighborhood. The initial five charter members soon grew to fifty or more.

Since March of 2006, Jo can be found every Thursday morning at precisely 10 o'clock on the Main Street of Solon Springs across from the National Bank of Commerce. Here, with or without other participants, shadowed by the growing pines and beneath the "Laughing Group" sign, she begins to laugh, sometimes to roar. She laughs whether it rains, shines, or snows. It doesn't matter.

She may laugh alone or be joined by up to twenty participants. They all wave to people passing by, who sometimes cannot resist joining them. Once the local Red Hat Society came out to laugh with them. Another time, a couple from Hawaii heard about Jo's laughing group on national television and made a point to visit and laugh with them.

"We're a destination point," Jo boasts with a gleam in her aging eyes as she begins to roar once more, waving at cars passing by.

"It's a good thing," she tells me, "a good thing for the public to relate to." It fascinates her that artificial laughter soon progresses to real laughter, to actually feeling better.

Yes, Jo, laughter truly may be the best medicine! After laughing with Jo and her group today, I feel recharged and ready to face whatever I may need to face.

Thank you, Jo, for sharing your wisdom with us all!